The purpose of the Odor Reporting Portal is to help the City identify odors from the Middle Point Landfill. It can also be used to identify odors that might be related to City infrastructure. The City launched the Portal on September 20, 2021.If you notice odors, fill out the form below. It will be submitted to and reviewed by the City. 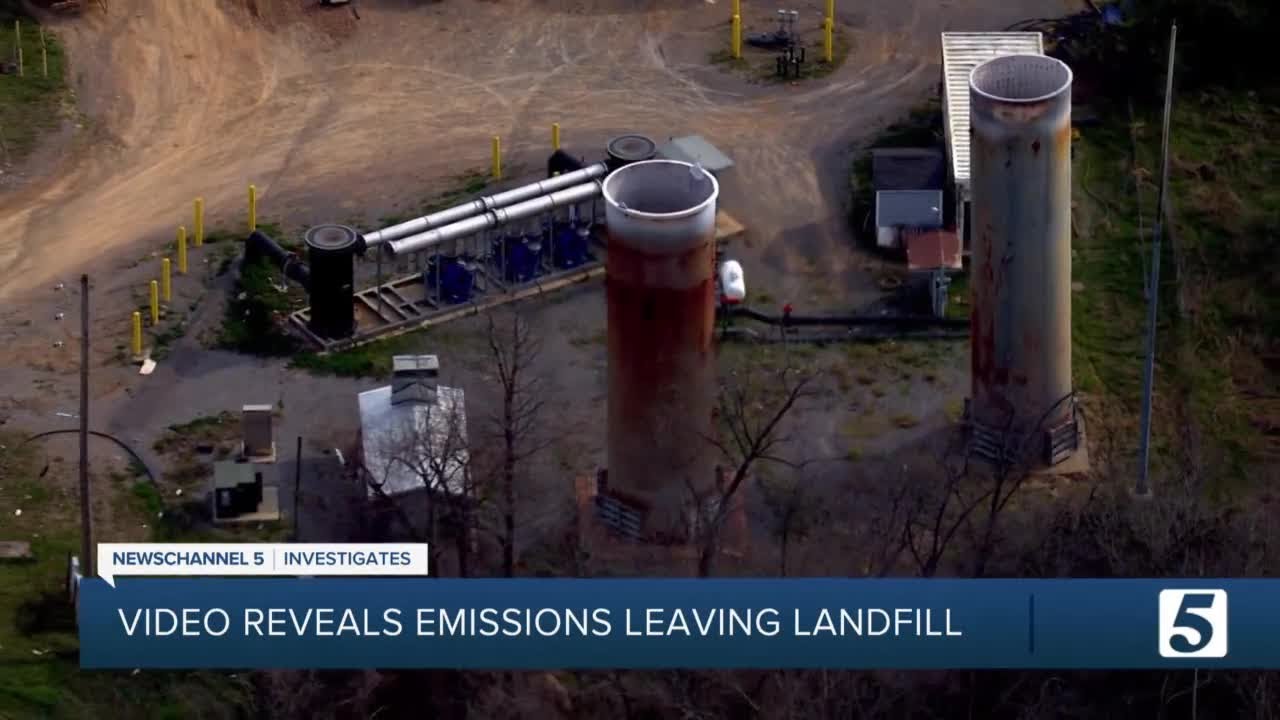 Starting in the fall of 2020, Murfreesboro Water Management created an air monitoring plan around the Middle Point Landfill, (MPL).  The monitoring was limited to one type of gas, hydrogen sulfide.  Hydrogen sulfide is found in both sewer gas and landfill gas. The results showed that the reported odor problems were caused by MPL, not by the City’s sewer structures or sewage pump stations.

Why is the City using this new odor reporting system?  Two main reasons.

The City appreciates your help in getting information needed to identify and solve the problem.

*This Form is NOT intended to provide an Emergency Response.

IF you believe there is any immediate health or safety risk, CONTACT THE RUTHERFORD COUNTY EMERGENCY MANAGEMENT AGENCY

People who live around Middle Point Landfill are all too familiar with the noxious odors that have persistently emanated from the landfill for years. In March 2021, a class action lawsuit was filed in federal district court in Nashville against BFI Waste Systems of Tennessee, LLC, the owner and operator of Middle Point Landfill. BFI is a subsidiary of Republic Services, a huge national waste management company. The lawsuit alleges that noxious odors emanating from Middle Point Landfill had caused “substantial harm” to nearby residents. More specifically, the lawsuit alleges that the noxious odors have and continue to interfere with the use of the residents’ properties and have diminished the value of residential properties in the area. Recently, residents and others owning residential property within three miles of Middle Point Landfill should have received notice of a proposed settlement of the lawsuit. The proposed settlement is subject to approval by the U.S. District Court for the Middle District of Tennessee. Information about the proposed settlement, including whether you are member of the class and how your legal rights might be affected if the court approves the settlement, is available at www.LSCCOUNSEL.com/MiddlePointLandfill. You can also call 1-800-536-0045 for additional information..

What is a class action?

A class action is a lawsuit brought by a single person or a small group of people purporting to represent the interests of a larger group, i.e., the “class.” Under federal law there are several requirements for maintaining a class action: (1) the class must be so large that individual lawsuits would be impracticable; (2) there must be legal or factual questions common to the class; (3) the claims or defenses of the representative parties must by typical of those of the class; and (4) the presentative parties must adequately protect the interests of the class.

Who is a member of the class?

The class in this lawsuit includes any natural person, i.e., a human being, who has owned or occupied any real property located within three miles of any part of Middle Point Landfill at any time since March 11, 2018, and who does not affirmatively “opt out” of the proposed settlement.

Who filed the lawsuit?

The lawsuit was brought by local resident, Justin Burriss, with the assistance of a Michigan law firm. A copy of the complaint is available at www.LSCCOUNSEL.com/MiddlePointLandfill.

Has the City had any involvement with the class action lawsuit or negotiating the proposed settlement?

No.  The City of Murfreesboro has not been involved in this lawsuit. Although the City owns property within a third of a mile of Middle Point Landfill, the City is not a member of the class of potential claimants or plaintiffs covered by the lawsuit because the class is limited to natural human beings. Government entities and private corporations and other companies are not natural persons and, therefore, are not part of the class.

Information about the proposed settlement and how the settlement might affect your legal rights is available at www.LSCCOUNSEL.com/MiddlePointLandfill. Even if you do nothing, you will be bound by the terms of the settlement, and you will give up your rights to sue BFI separately about the same or similar legal claims made in the lawsuit.

Residents who might be class members should also be aware that unless they opt out of the lawsuit and ask to be excluded from the settlement, they will be barred from suing BFI “on any alleged claims for odor, dust or other alleged emissions that occurred after the Final Settlement Approval for a period of thirty months after Final Settlement Approval.”

Claims that accrue during this “cooling-off” period might constitute grounds for suing BFI after the cooling-off period.

Does the City support the proposed settlement?

No. Even though the City is not member of the class, the City’s legal counsel sent a letter in December to the law firm in Michigan representing the plaintiffs clearly stating that the City wished to be excluded from the settlement, i.e., it wished to “opt out.”  The reasons why the City doesn’t support the proposed settlement are discussed below.

Can I opt out of the settlement?

Yes. Persons living within 3 miles of the landfill can opt out. Most members of the class should have received information about the proposed settlement and how to opt out in the mail. However, instructions on how to opt out and can also be obtained by clicking on the following link: www.LSCCOUNSEL.com/MiddlePointLandfill. Persons wishing to exclude themselves from the settlement must take certain specific actions on or before January 23, 2022. If such actions are not taken, a class member will be bound by the terms of the settlement and will give up the right to sue BFI separately about the same or similar legal claims made in the lawsuit.

Why does the City object to the settlement?

The City finds the settlement terms as vague and inadequate. Most importantly, they do not require Republic/BFI to mitigate the odors fully, let alone fix the underlying problems at Middle Point that are likely causing the odors.  The settlement terms allow Republic/BFI “sole discretion” over the “character and amount” of odor control measures.  The landfill has long had sole control and failed to fix the problem.  The settlement does not require Republic/BFI to do anything differently to manage the gas and odors and there is no promise that anything will change.

Recent gas sampling by Republic/BFI over the last 2 years shows that the gas temperatures at the Aluminum Waste Reaction gas wells (so called “AWR” wells by BFI) continue to climb above the federal limit of 160F.  That indicates to Republic/BFI, its consultants and state regulators that there is has been an existing need for more gas extraction wells and other controls.  There is no way to know if the settlement allows BFI to simply take credit in the settlement for gas solutions that were already needed and budgeted for long before this settlement arose.  Under the deal, the gas and odor measures can include drilling new horizontal or vertical gas wells, new extraction wells, or other gas control including a new gas flare.  These are all solutions that Republic/BFI has already been employing for years with no discernible success.

What about the requirement for Republic/BFI to spend $1.75 million on odor controls?

The amount sounds like a great deal of money to some, but it is small in terms of managing any landfill.  For example, the site is now at 207 acres of waste fill.  Back in 2007, Republic/BFI engineers estimated that it would cost more than twice that amount of money, $3.7 million, to install a basic plastic cover with drainage over a smaller area, 133 acres.   By this single example, $1.75 million spread over 4 years appears wholly inadequate for the design and installation of engineered gas extraction/management equipment.  The amount may be particularly inadequate because Republic/BFI records confirm that the Aluminum Waste Reaction “AWR” Republic/BFI is trying to manage is highly corrosive to various metal and plastic infrastructure, requiring special engineering and/or replacement.

By way of an example of the financial issues involved in these type of situation, Republic’s County Wide Landfill outside of Canton, Ohio has the same issue as that found at Middle Point. The Ohio Environmental Protection Agency and Federal Environmental Protection Agency imposed a $10 million penalty on Republic because of the odors affecting the communities surrounding the County Wide Landfill. A Republic landfill in the St. Louis area also incurred chemical reactions events that produced noxious odors effecting nearby community. Republic reported that by 2014 it spent $125 million to address that problem and settled a class action lawsuit for $6.8 million.

Republic Services is a $41 billion company and one of the largest waste management companies in the Country. For 2020, it had $1.7 billion in operating income. As of December 31, 2020, Republic operated facilities in 41 states through 345 collection operations, 220 transfer stations, 186 active landfills, 76 recycling processing centers, six treatment, recovery and disposal facilities, nine saltwater disposal wells, and seven deep injection wells.

Is BFI required to solve the odor problem with this settlement?

No.  The settlement allows Republic/BFI to spend the relatively insignificant $1.75 million on any odor measures they wish, which could include simply paying for air misters that mask the gas odor in a limited manner and do nothing to address the gas emissions leaving the site.